skip to main | skip to sidebar

After declining his $4.5 million option for next year, and having a deal with Dennys Reyes fall through, the Phillies have resigned left-handed reliever J.C. Romero. The contract details have not yet been made public, but knowing that the Phillies are now extremely tight for money after signing Cliff Lee, it stands to reason that Romero's contract is similar to the $1.1 million deal that they were prepared to give Reyes.
With Romero, the bullpen is all but set for next year: Brad Lidge as the closer, Ryan Madson setting him up, Romero from the left side, Jose Contreras, Danys Baez, David Herndon, and the final slot (assuming they keep seven pitchers in the bullpen) will likely be kept for a spring training prize. If for some reason Joe Blanton isn't traded, the slot will probably go to Kyle Kendrick, who would serve as the long reliever/slot starter. If Blanton is traded, which seems likely, the likes of Sergio Escalona, Mike Zagurski, Vance Worley, Drew Carpenter, and Scott Matheison will battle it out. Unless the Phillies shock everyone by signing a right fielder, their major offseason moves are probably done. resigning Romero and Contreras takes care of their bullpen needs, they feel comfortable trying some combination of Ben Francisco/Ross Gload/Domonic Brown/John Mayberry Jr. in right field, and then that whole Cliff Lee thing happened. It's possible that they would still resign Chad Durbin, and that would pretty much set the bullpen for the year, unless they're not actually committed to Herndon. At this point, the Phillies will probably make some minor league signings, and those guys will have opportunities to get a bench or bullpen slot, or maybe even the final rotation slot.
Romero struggled with his control last year, issuing 29 walks in 36 2/3 innings, but that may have been related to his injury filled 2009. He still managed a 3.68 ERA. Even with his control issues, left-handed hitters hit .217 against him, in comparison to Reyes against whom they hit .307. Even with his mediocre 2010, Romero has a career 2.60 ERA with the Phillies, and as long as they're signing a left-handed reliever of his caliber, such as Reyes, Joe Biemel, Ron Mahay, Randy Flores, and so on, it may as well be a guy who has been successful for them in the past. Best case scenario, he can bounce back and put up the kinds of numbers he's had for Philly in the past. Worst case scenario, he battles injury, though that wasn't an issue last year, and someone like Escalona has to step up, a possibility the Phillies were apparently considering anyway.
Actually, the ultimate best-case scenario is the reincarnation of three-headed monster at the end of the Phillies bullpen formed by Lidge, Madson, and Romero that happened in 2008.
Posted by Jeff Raab at 8:26 AM

We here at The People's Phillies Blog had an unhealthy infatuation (or at least one of us did) with Michael Bourn in 2007, and we just can't let him go. With that, we've unveiled the Michael Bourn Steal Tracker in which...we'll track Michael Bourn's steals. 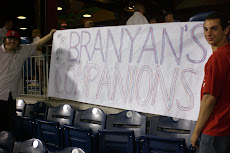 Here at The People's Phillies Blog, we have our own take on the ever-popular fan groups at Phillies games. We prefer to make cleverly-named groups for less heralded players. Here are the groups we've done so far.

If you have your own ideas for fan group names for obscure players, send us an email.